From the formal elegance of Drummond castle gardens to the stylishly modern.  This edition of Accent Garden Profiles is all about the modern abstract set amongst the dense organic of the Barbara Hepworth Sculpture Garden at Trewyn in St Ives, Cornwall. Ever since the turn of last century, St Ives has been a magnet for artists of all persuasions. Painters, potters and sculptures alike have all been drawn to this south Cornish town.  One of the most renowned of these was the Yorkshire born sculptor Barbara Hepworth.

When we visited it this garden during the summer last year, the sculptures were such strong examples of post war modernist art of the 60’s.   So fluid and at one with nature.  The truth is the sculptures and the garden goes back much further than that. Much much further actually, since Barbara and her partner moved to Cornwall from London during the second world war. Barbara lived and worked in Cornwall for ten years before she discovered Trewyn Studios, a property made up of part of the lands comprising an old stately house and gardens.  The part she and her family moved into was the gardens, along with some renovated buildings that made up her studios.  The setup was so perfect that Barbara wrote about finding Trewyn as “a kind of magic” and it was here that she lived and worked until her death in 1975.  Initially, Barbara’s focus was on stone and wood sculptures, designed and carved in the garden itself, which he often referred to as her true studio.  From this idyllic setting she took inspiration from the nature and vitality surrounding her, creating ever more organic and abstract sculptures that not only looked good, but seemed to blend with the garden and evoke a true sense of natural form.  Many of her pieces were actually designed to work as part of her garden and she displayed them as such, usually on a makeshift plinth of breeze blocks until they were ready to be sold or moved on. 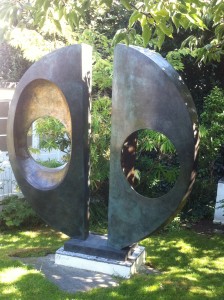 Perhaps it was having to eventually part with these integral elements of her garden that pushed her in the 1950s to begin working with bronze. This was a departure for Barbara since she had only ever worked with natural materials like stone and wood until then, but using bronze meant that she could make multiple castings of any given piece. This then meant she could institute a policy that whenever she completed a piece, she could order an extra casting for herself and keep her work as a permanent addition to her garden where she felt it belonged. This move into bronze sculpture also lead her to begin creating grander and, in a word, bigger sculptures that could function as true outdoor focal points for a garden. 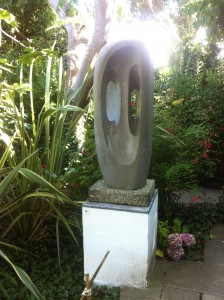 In this way the garden largely grew and evolved around the sculptures Barbara was creating, even as she drew her inspiration to make them from the garden itself. The result is an amazing blend of art and nature that blurs the lines between the two and enhances both, making the sculptures seem as though they grew as part of the garden itself, rather than just being carved or designed there. Remarkably however, the garden was never open to the public but acted as Barbara’s inner sanctum until her tragic death in a house fire at Trewyn in 1975.  As per her last will and testament, the garden and studios were turned into a museum of her work and finally opened to the public in 1980.  This then, the garden itself, became her final artwork, a testament to her life’s work and possibly her greatest. The gardens as they stand today are a joy to behold and a fascinating insight truly worthy of one of the twentieth century’s greatest artists.