For those of us currently grumbling about the poor weather…ok so for everyone really, here’s some good news. Today (2nd February) is the Celtic festival of Imbolc, an ancient marking of the first signs of Spring. 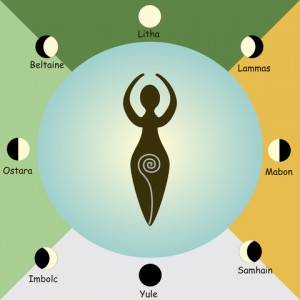 In times of yore this day would be celebrated as the day in which the Goddess (sort of a mother nature figure) transforms from the withered old crone of winter into the spring maiden, bringing with her fertility, warmth, bunnies etc and so forth.  Traditionally, this is down to the first appearance of spring flowers and leaves, the natural signs of the world awakening from its winter slumber. Of course in olden times it probably had as much to do with the nights drawing out again, the start of the agricultural year and the fact fewer people were freezing to death in their hovels, which is a perfectly valid reason to celebrate to be honest. It is also known as the first of the four “fire festivals” where throughout Europe great bonfires would be built (and still are in some places) to honour the victory of the sun and of light in general.

Of course this year Imbolc is a little out of place, which gives you some idea of how much the weather has changed since way back when.  Not only have the leaves been budding since, well, late December really, but the spring bulbs have been blooming for some time too.  Bearing in mind that one of the old rituals for the festival is drawing the symbol of the sun in the snow, things must have taken a drastic swing in terms of weather at some point. Still it’s a nice thing to commemorate; and as good a reason as any to shake off the gloominess of winter and get back out in the garden in time for the spring thaw…whenever that was.